The Southwest Coast of Newfoundland and Labrador has incredibly scenic routes that provide visitors with stunning views and historical attractions. These suggested drives will provide a vacation enhancement for any traveler.

Click on any selection below for directions of each drive, accompanied by a regional map to help you along.

Drive 10 minutes from Channel-Port aux Basques North on Route 1
This will take you to J.T. Cheeseman Provincial Park, where the shoreline offers a stretch of sheltered beach with soft powdery sand. The park is a good place to see the piping plover, an endangered shorebird with only 500 or so in Atlantic Canada and fewer than 5,000 in total worldwide. J.T. Cheeseman Park, Grand Bay West, Searston and Sandy Point (further north near St. George’s) all have sandy beaches the plovers favour and are recommended viewing areas. Take care not to disturb these rare birds.

Look here also for the common loon, murre, Canada goose and pine grosbeak. You’ll also find the white admiral and Atlantis fritillary butterflies. There’s a two-kilometre trail called Smokey Cape, named for the windblown surf found at the beach parking lot, which creates a misty effect. Take a walk along the beach to search for surf clams and dogwinkles.

Back on Route 408, drive 3 kilometers from Route 1 to Cape Ray
The gravel road through the park meets paved Route 408, which takes you to the community of Cape Ray, three kilometres from Route 1 – one of three capes forming the triangular points of the island of Newfoundland. Situated between the Cape Ray lighthouse and the Gulf of St. Lawrence is a site that was used as a summer hunting camp by the Dorset people from 420 B.C. to 385 A.D.

Cape Ray was also the site of the first submarine telegraph cable in Newfoundland. Laid in 1856, this project was the last link in the communication chain that connected Newfoundland with the rest of North America.

After a visit to the cape, you can sunbathe or windsurf at nearby Cape Ray Sands, or you can drive up a gravel road to Red Rocks, a former farming and fishing community. There’s a spectacular view from the 1,000-foot high Sugar Loaf behind Red Rocks.

Head back to Route 1 toward the Long Range Mountains
Take Route 408 back to Route 1. The highway now climbs steadily north along the province’s west coast. The terrain changes dramatically and the low-lying barrens give way to the southwest section of the Long Range Mountains, a part of the ancient Appalachian escarpment. Throughout this region you will see spectacular mountain scenery and encounter ridges to challenge the imagination and skill of amateur rock climbers.

Moody and imposing Table Mountain is accessible here by trail and tops out at 528 metres. The area often raises gusts exceeding 160 kilometre/hour, which disrupt highway traffic and were once known to derail the now discontinued trains. Little wonder this area is known as Wreck House. During World War II, the United States built a radar station, an airstrip and assorted buildings on top of Table Mountain.

The home of Lauchie MacDougall, the famous human wind gauge, was located in the valley below. Lauchie was under contract with the Newfoundland Railway to determine whether the area was passable for trains on any given day and to notify them if gusts were too high. After his death in 1965, his wife continued the work until 1972. Today, truckers rely on CB radios and word-of-mouth for news about the wind.

Route 1 to exit Route 407 – Codroy Valley
Continue on Route 1 to the exit Route 407 (about 35 kilometres from Channel-Port aux Basques). You are now entering the Codroy Valley, one of the best farming areas in the province. Route 407 takes you on a pleasant ride south along the Little Codroy River to St. Andrews, where the agricultural landscape contrasts with the Long Range Mountains in the background. The mountains also provide a magnificent backdrop for a 9-hole golf course.

The Codroy Valley was one of the earliest settled sections of the West Coast. French colonists arrived in the 1700s and were later joined by Scots and Channel Islanders from across the Gulf of St. Lawrence. The Scots settled in the fertile valley south of the Anguille Mountains and their descendants still farm here.

In St. Andrews, take the road toward Upper Ferry and cross the Grand Codroy River. (Alternatively, you can take Route 407 to Searston where a bridge crosses the mouth of the estuary.) The latest news is of a 325 million-year-old fossil discovered in the area in 2010. The fossil, probably from an amphibian, is the first of its kind found in the province.

Continue through Codroy to the end of Route 407 and Cape Anguille
Cape Anguille is the most westerly point of the island of Newfoundland where the lightkeeper’s house is now a tranquil inn. Shaded by the Anguille Mountains to the east, the Cape boasts a spectacular view from the lighthouse, which was built in 1905 following a marine disaster. Before leaving Codroy, be sure to drop by the Holy Trinity Anglican Church, which held its first service back in 1914.

The Wetlands Interpretation Centre is located directly on the estuary. The interpretation trail that runs along the banks of the Grand Codroy River is an easy restful walk. Interpretation panels enhance the understanding of estuaries, ecosystems, species adaptation and models for environmental stewardship. The centre also provides ongoing educational programs and interactive exhibits that provide visitors, especially young children, with an opportunity to learn, hands-on.

Anglers should bring their flies and tackle when visiting this area because the Grand Codroy and Little Codroy are scheduled salmon rivers.

Drive 45 kms east from Channel-Port aux Basques along Route 470
Early mariners like Sir Humphrey Gilbert, Jacques Cartier and Captain John Mason explored the rugged southwest coast of Newfoundland more than 400 years ago. Many of the community names in the area are English versions of the original French or Basques names given by the first settlers. Rose Blanche is named for the white granite the community is built on. In French, rock is roche, and in English, roche has been changed to rose.

Rose Blanche is the western terminus for the coastal boat that services isolated communities along Newfoundland’s South Coast (The Southwest Coast by Boat – Part I [internal link]). A small coastal boat (no automobile capacity) connects Rose Blanche with the isolated village of La Poile, about 90 minutes to the east.

Head West along Route 470 toward Diamond Cove and Burnt Islands
After leaving Rose Blanche and heading West you’ll reach Harbour Le Cou – celebrated in the Newfoundland folk song of the same name – a community that also bears witness to the French element on this shore. Along Route 470, you’ll pass through a number of other small fishing communities including Diamond Cove and Burnt Islands. Be sure to explore the unique heath-covered terrain of coastal Newfoundland before you continue on to Isle aux Morts, or Island of the Dead. This community earned its macabre name because of the number of marine disasters that happened in the treacherous waters offshore.

In 1828, George Harvey, along with his son and daughter, saved nearly the entire complement of passengers and crew from the sinking ship Despatch by stringing a lifeline from the ship to the shore with the help of their valiant Newfoundland dog, Hairyman. King George IV awarded the Harveys a medal for bravery and The Canadian Coast Guard Ship Ann Harvey, was named after George’s daughter.

This coastal area has a long history of death and disaster, with the wrecks of no fewer than 40 ships said to be lying at the bottom of the Cabot Strait. These tragedies have given rise to many traditional songs and stories of lost ships and courageous rescues at sea.

After Margaree-Fox Roost, head back to Channel-Port aux Basques
Situated on the southwest coastal plain, this was a fishing station for the French, Portuguese and Basques as early as the 16th century. While it is named for the Basques, it was hardly their only port. Research in Spanish archives uncovered information that Basque whalers and fishermen occupied at least seven islands on Newfoundland’s west coast and in southern Labrador.

Channel-Port aux Basques is the principal Marine Atlantic ferry terminal in the province. There’s a boardwalk between the ferry terminal and Scott’s Cove Park where you can stretch your legs. The Gulf Museum here houses two rare 17th-century astrolabes – early marine navigational instruments. Only 33 are known to exist worldwide. The museum also displays a 100-year-old diving suit.

While in Channel-Port aux Basques, you can also visit Memorial Park featuring monuments for the S.S. Caribou, a civilian passenger ship operating between Newfoundland and Nova Scotia that was sunk by a German U-Boat in World War II with the loss of 137 passengers. The Scott’s Cove Boardwalk is a nice stroll, marked by colourful flags shaped like ships and sails. At the park visit “The Village” which consists of a ship amphitheatre surrounded by quaint little shops modelled on typical outport fishing stages. Before getting back on Route 1, drop by the Port aux Basques Railway Heritage Museum for a guided tour of a restored train filled with artifacts from a century ago.

Channel-Port aux Basques is the western end of T’Railway Provincial Park, a 545-mile jaunt through the wilderness that follows the abandoned Newfoundland Railway line all the way to St. John’s. It’s part of the Trans-Canada Trail.

Just west of Channel-Port aux Basques are the beaches at Grand Bay West, home to the endangered piping plover. These are among the best sandy beaches in Newfoundland. Here you will also find another feature rare to Newfoundland: salt marshes. These marshes attract many different kinds of shorebirds and waterfowl because of their lush growth. This southwestern corner of Newfoundland is a great place to see birds during the spring and fall migrations. 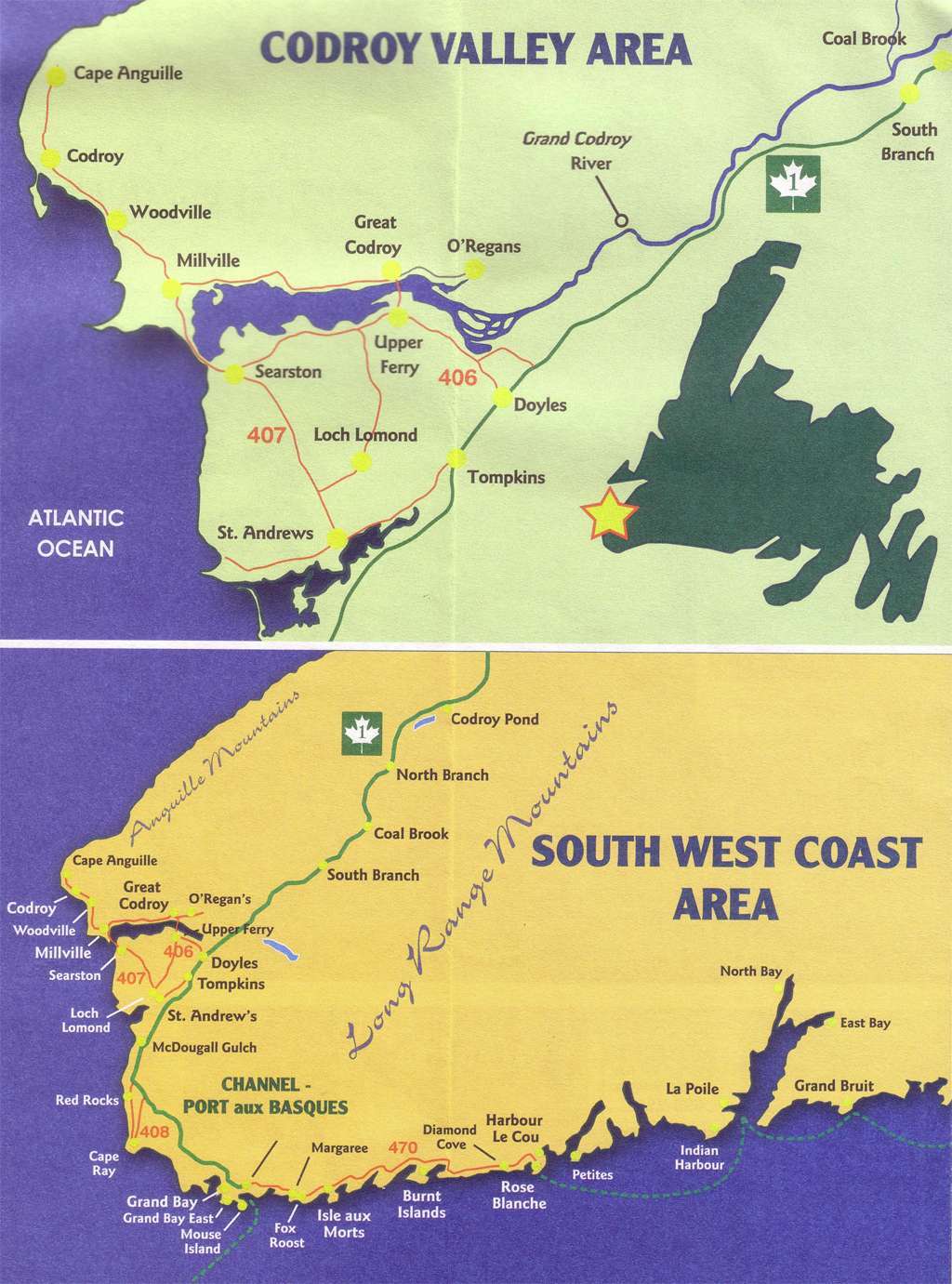